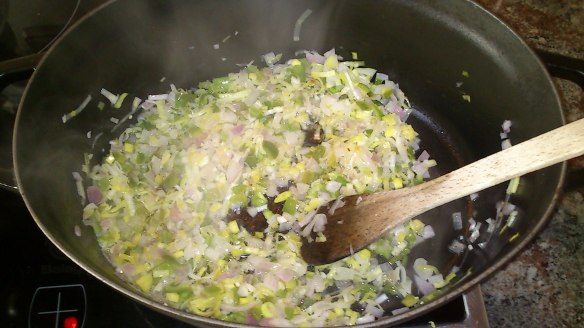 Let’s start with the base, the foundation, the essence of countless dishes across Spain’s many regions: the sofrito, as it is known in Castilian Spanish. The most typical Spanish sofrito is made from onion, green pepper, garlic, tomato and olive oil, yet there are many variations, depending on the region and on the dish the sofrito is destined for, from rich meaty stews to delicate seafood rices to hearty vegetable and legume soups.

The Catalan sofregit, beautifully explained in Coleman Andrews’ book, Catalan Cuisine, is perhaps the oldest known variation, having appeared in the Libre de Sent Soví (c. 1324), an anonymously authored medieval recipe book. Today sofregit is typically made from just onion, tomato and olive oil; however, Andrews points out, before the sixteenth century, when tomatoes were first brought to Spain from the Americas, the earliest sofregits were usually made even more simply, from onion and olive oil.

Across the Spanish regions, some sofritos incorporate additional aromatics (vegetables, herbs and spices) such as leek, bay leaf, paprika, salt pork, or bacon, but the basic principle is the same: elements are finely chopped and slowly sweated in olive oil over low heat to concentrate their flavors into an intense, viscous base that is then built upon, in the same pot or pan, to create a dish. In some instances, a sofrito is made and then stirred into a separately cooked element of a dish.

During the first two sessions of our class in the BCulinary Club at the Basque Culinary Center, we created several distinct sofritos. We sweated onion and garlic in olive oil for our Hake in Salsa Verde with Clams (Merluza en Salsa Verde con Almejas). To make Sukalki (Vizcayan Beef Stew), we created a base from red onion, garlic, leek, turnip and carrot. For our Creamy Rice with Squid in its Ink (Arroz Meloso con Calamares en su Tinta), our classic sofrito was made from onion, pepper, garlic and tomato. One of my students posted some great pictures and a fun overview of our experience making the Creamy Rice in her blog based on her semester here in the Basque Country. Here she is, working the rice!

Beyond the sofrito, similar preparations of sweated aromatics form the foundations of cuisines around the world. The Portuguese refogado is nearly identical to the typical Spanish sofrito; the French mirepoix consists of onion, carrot and celery (similar to the Italian soffritto); Cajun and Louisiana Creole cuisines have their “holy trinity” of bell pepper, onion and celery; and many Indian dishes are built from a base of ginger, garlic and onion.

Many other cuisines rely on specific aromatics that are combined (but not necessarily diced and sweated) to form characteristic flavor profiles. Thai cuisine is perfumed by its kaffir lime leaf, lemongrass and galangal, and Greek cuisine by its garlic, oregano and lemon. There are many other examples, and great resources to explore on the subject, including this post at The City Cook and this post at Foodista.

This week we’ll be busy sweating another sofrito as we make Rioja-style Potatoes with Pork Ribs (Patatas a la Riojana con Costilla de Cerdo). Here’s a taste! On Egin!